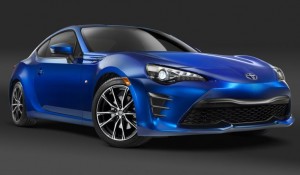 With a combination of spirited Scion styling and Toyota Q-D-R (Quality-Durability-Reliability), the former Scion FR-S will debut as the reinvigorated 2017 Toyota 86 at the New York International Auto Show, showcasing interior and exterior changes, as well as suspension and powertrain upgrades. The new Toyota 86 will go on sale at all Toyota dealerships this fall.

“We are excited to be moving into a new stage of growth for Toyota, by welcoming fresh and inspiring designs like the Toyota 86 into the fold,” said Cyril Dimitris, Vice President of Sales, Toyota Canada. “The new name and features perfectly complement our existing Toyota line-up of cars designed to meet the needs of creative, young urban professionals and we know this important vehicle will be very well received.”

For the 2017 model year, the Toyota 86 will add LED front headlamps and turn signals, LED rear taillights, and fender garnish design, and new bumpers on the front and rear. Additionally, the alloy wheels feature a new design. On the inside, the 86 will sport new materials on the seats, door armrest and door trim, as well as on the instrument panel surround.

Enhanced control and agile performance are achieved through revised shock tuning and a spring rate change. On the manual version of the car, there is a gear ratio change for improved acceleration, as well as a five-horsepower increase. Hill Start Assist Control (HAC) helps prevent the car from rolling back on steep hills.

Joining the Toyota 86 on the show floor will be the Toyota C-HR Concept, which recently debuted in Canada at the Salon international de l’auto de Québec. More information about the technical specifications for the C-HR will be available when the North American production version debuts later this year. The vehicle goes on sale in spring 2017 as a 2018 model.