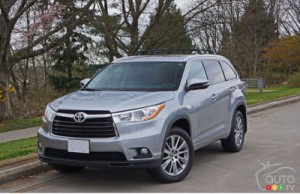 The Toyota Highlander sells well as far as dedicated 7- to 8-passenger SUVs go, sitting third amongst 10 competitors with 10,412 units sold in Canada last year. It’s been Toyota’s go-to midsize crossover SUV since the turn of this last century and is now two years into its third generation, so it’s one of the more enduring nameplates in the segment,

While top three in its class is good, consider for a moment that Hyundai sold 26,685 five-passenger Santa Fe Sports, Ford delivered 16,580 examples of its five-occupant Edge, Nissan pulled in 10,128 Murano customers, and Dodge found another 25,646 buyers for its 5- and 7-passenger Journey. Even Kia, which normally doesn’t sell even close to the levels of any of the above, managed to attract 14,372 Sorento customers.

You’d think a light would go on somewhere in the minds of the Toyota collective and, voila, a 5-passenger SUV would appear, but so far we’re left with the very good, 7-passenger Highlander which, unfortunately, doesn’t sell as well.

My favourite midsize crossover design
I must admit, though, it’s still my favourite midsize crossover from a styling perspective. It’ll soon get upgraded for the 2017 model year, however, with a bolder, deeper, and edgier version of the current grille, plus modified headlights, taillights, and body panels, not to mention a new, direct-and-port-injected 3.5L V6 and a more efficient 8-speed automatic transmission. It’ll be a significant mid-cycle makeover, but probably not so much that you’ll be sorry if you purchased the current version.