A Van for All Seasons – and All Reasons: the 2017 Toyota Sienna 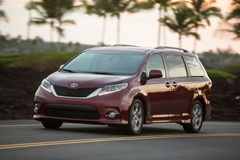 Whether it’s a family-sized summer road trip or the weekly routine of errands and after school activities, the Toyota Sienna does it all and makes it better – with big style and generous amenities, plus an easy-driving attitude and a new engine/transmission combination for 2017.

“The Sienna proves that a minivan can deliver huge helpings of comfort and style – making it a popular choice for Canadian families on the move, all year round, and the recipient of a 2016 Today’s Parent Approved seal from Today’s Parent magazine,” said Cyril Dimitris, Vice-President, Toyota Canada Inc. “For 2017, a new powertrain delivers more driving fun, joining an already impressive list of intuitive and convenient features and technologies.”

Bold exterior styling features plenty of windows to create a spacious, modern interior maximized by the available dual power moon roof. The Sienna is available in seven- or eight-passenger models that are easy to reconfigure for carrying people or an impressive amount of cargo.

A choice of six models includes two with the extra all-weather confidence of all-wheel-drive, while several available upgrade packages and mobility configurations allow Canadians to choose the perfect Sienna for their lifestyle.

The Toyota Sienna is available in the following models:

Safety is always standard on a Toyota, which is why every 2017 Toyota Sienna is equipped with active and passive safety features, including eight airbags, 4 ISOFIX child safety seat anchors, the Toyota Star Safety System, a back-up camera, and more. Available safety technologies include Rear Cross Traffic Alert, Blind Spot Monitor, and more.