Welcome to Milton Toyota, your certified Toyota dealership in Milton, Ontario. We are presenting the new 2017 Toyota Corolla IM. You can find all the relevant information below.

Meet the new Corolla iM. This 2017 Corolla has a bold, sporty look with it's new hatchback design. Corolla iM is the best representation of versatility fused with personality. This design is ideal for the urban environment or weekend adventure. 5-doors give you easy access to a stylish interior, and 60/40-split rear folding seats let you configure the space for cargo, friends, or a combo of both. A long list of standard features, from Toyota Safety Sense-C to 7” Touchscreen Display makes sure that wherever the road takes you, comfort, convenience and peace-of-mind are along for the ride.

Drivers can feel confident the 2017 Corolla IM is a smart choice for their lifestyles. Standard features now include, 7" Touchscreen Display, Aha Audio System with Internet Radio, Bluetooth® Capability and much more. The newest Corolla will remain a standout in its segment with roomy rear seats, standard Bluetooth, or available Premium Audio with Integrated Navigation.

Contributing to its success, the Corolla has continued to evolve over five decades. Its first version ushered in new technologies like the MacPherson strut suspension, a compact engine with a five-bearing crankshaft, two-speed wipers and back-up lights. Drivers over the years fell in love with a variety of models from family-friendly sedans, the three-door "liftback" E50 and sports coupé E51, the fun-to-drive AE86 and all-new, sportier 11th generation Corolla. Even as the company reflects back on its longstanding heritage, it also looks forward to continuous growth, like the upcoming conversion of the Scion iM to the Corolla nameplate. The 2017 Toyota Corolla iM combines the palpable energy of Scion styling with Toyota Q-D-R (Quality-Durability-Reliability).

After 50 years, it’s clear that Corolla always has, and always will deliver against drivers’ needs wherever and whatever they are. The 2017 Corolla IM will be on sale in Canada in September. 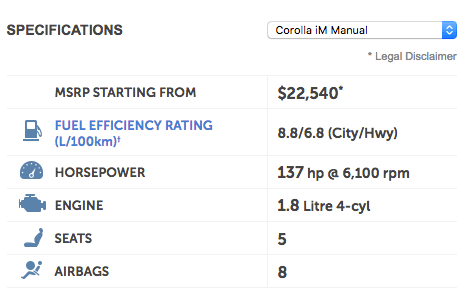