Look around a Toyota showroom today and you should immediately notice a dramatic change in the styling language being used on all of their latest models. There’s plenty of attitude to be found with complex, assertive creases and folds in their bodywork and gaping, almost angry grille openings broadcasting their new attitude. This new era of Toyota is anything but “beige”.

The Toyota C-HR is becoming one of the company’s most popular crossovers. That has a lot to do with its affordable price, compact size and efficiency for fuel and interior space. It also stands out thanks to Toyota’s polarizing new “Diamond Design” language, and yet despite that, a team of designers from ED2, Toyota’s European design studio, believes they should have taken it further. Enter the C-HR HyPower Concept featuring a more powerful look, more features in and out and… a more powerful hybrid drivetrain. 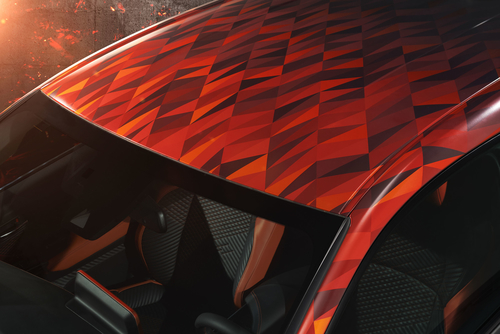 The HY-Power Concept uses only production sheet metal, relying instead on a new paint called Dark Carbon to make it stand out. Dark Carbon is a unique silver hue with a dangerous-looking matte finish. That matte finish contrasts really well with the high-gloss black front lip spoiler, nose grille, and wheel arch trim for a very fresh and modern look with heaps of attitude.

Despite the effectiveness of the paint and trim, it’s the Burning Orange highlights that have the most impact. The lower grille, A-pillars, side mirror caps, and roof have all wear enhancements in this wild orange with the latter being particularly impactful, displaying a geometrical pattern with various shades of orange. The roof also becomes darker toward the rear, to the point where it matches the glossy finish of the spoiler and the C-pillars. Cool? Yes. Beige? No. 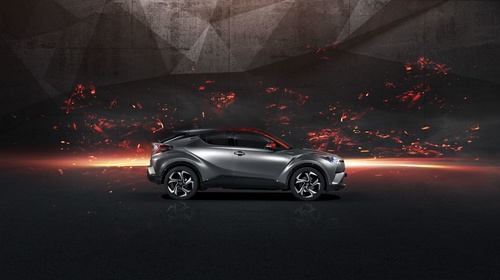 Inside, the dark against orange contrasts continue, with the black seats featuring orange headrests and bolsters. Bright Burning Orange yarn was also used for an asymmetrical quilting pattern on the seatbacks, cushions, and door panels, giving the cabin a premium, Bentley-inspired look.

Toyota is keeping mum on exactly what they’ve done to increase the power and performance of the concept. It seems likely that the hybrid powertrain would focus on low-end power to boost acceleration and responsiveness, but to what degree, we’ll have to wait to find out. They’ve also admitted that higher performance hybrid options will be made available in all of its core models and that further information will be revealed in early 2018, so it’s safe to assume that a more powerful hybrid C-HR will become available next year. 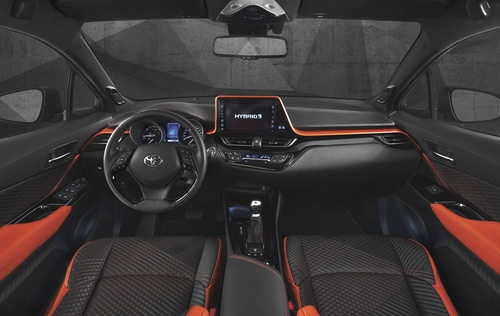 So, what do you think? Is a small, visually dynamic, performance crossover something that interests you? Toyota thinks it will interest enough people to warrant the addition of vehicles very similar to the C-HR HY-Power Concept very soon, so stay tuned!