After receiving a record number of entries, the judges of this year’s Toyota Dream Car Art Contest completed the difficult task of choosing the nine Canadian winners.

“In my first year as a judge for the Toyota Dream Car Art Contest, I’m amazed by the artwork of so many young and talented Canadians,” said Larry Hutchinson, President and CEO, Toyota Canada Inc. “A glimpse into the creativity demonstrated in these submissions provides insights into the way youth think about the future of mobility.”

Last fall, Canadians were asked to invite youth ages 15 and under to envision their “dream car” – and the entries inspired a wide range of storytelling. Artworks were judged on originality, creativity and relevance to the “dream car” theme, and three winners were selected in each of the three age categories: under 8, 8 to 11, and 12-15. 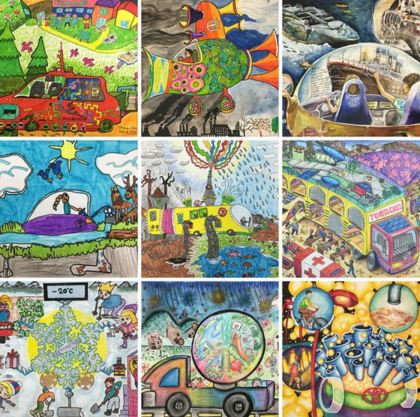 The nine winning entries will now have the opportunity to represent Canada in the world contest for a chance to be chosen among 30 global finalists. If chosen, each global finalist (and his/her parent(s)/guardian(s)) will be invited to travel to Japan on an all-expenses paid trip to attend a special awards ceremony this August. In the last three years, three Canadian entries were chosen as global finalists.

Commenting on being a judge, esteemed lifestyle, arts and culture writer Sonya Davidson noted how uplifting the experience was.

“Dreams are so important in life,” she said. “To dream means to have hope and inspiration. It’s so magical to see the variety of dream cars from all the young artists. They’ve shown that dreams vary and there is no limit to what the possibilities can be when we use our imaginations. But the ideas were more than dreams on paper. There were many concepts that were not only thoughtful but also insightful.”

Added fellow judge Steve Fisher, founder of Republic of Quality, an award-winning website consultancy: “Not only was I impressed with the creative nature of the submissions, I was thrilled with how much care was demonstrated for the future of our planet. There was so much compassion and thoughtfulness in so many of the entries.”

“I was deeply touched by these young artists and their drawings – some by their ideas, some by their artistic talents and some by the messages they chose to send. Wow, so much talent! Just knowing that these children will grow up to be tomorrow’s adults fills me with love and hope. Bravo to all the participants,” said Jaime Damak, leading family blogger and founder of Je suis une maman.