Flowers might be the usual Valentine’s gift, but this year, give her something she can use to go pick her own flowers. The 2017 Toyota Tacoma can take her backcountry where she will find meadows of flowers for the picking.

Toyota brought back the TRD Pro package for the 2017 Tacoma, and it won’t disappoint. It is built to take her way back off the trail where she can hunt, fish or even pick those mountain wildflowers come spring.

The TRD Pro is built to be a high-performance off-road vehicle that can plough through the snowdrifts, crawl over rocks and forge through the muddy, running water of mountain streams.

In fact, the TRD Pro has been fitted with front springs that lift it up one inch that are helped along by four corners equipped with internal-bypass Fox shocks. It has a sport exhaust and front skid plate, and Toyota branded the wheels with the TRD badge. It has an aggressive hood scoop and front grille, which makes it look like it’s chewing its way through the snow or brush. She is going to love it.

The four-wheel drive has a two-speed transfer case and optional V6 with 278 horses. You can choose between a manual or automatic transmission; the manual comes standard on the Pro. 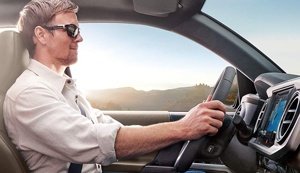 Just because it’s a tough truck doesn’t mean that you’re riding on a stiff seat and have no amenities. The exact opposite is true.

Toyota made this truck’s interior as luxurious and appealing as any of their high-end passenger cars, so you can expect to be pampered and treated to comfort and style once you step foot inside the cab. That is something that she will really appreciate.

There is ample leg and headroom in the cab, and the form hugging bucket seats place you securely behind the multi-purpose steering wheel.

The interior is constructed from soft touch materials and trimmed with metallic accents that lend sophistication to the overall interior.

The infotainment centre is a short distance from your hand, and the centre console not only gives you easy access to the gearshift knob, but also offers storage areas that are made to fit your phone or coffee mugs along with other items.

If she really wants to go on an adventure, Toyota equipped the Tacoma TRD Pro with a GoPro® mount-on windshield camera that is ready to record her every twist and turn through the backcountry. The best part is that it is standard equipment. As are heated seats for those winter offroad trips that can get a little on the cold side.

The TRD Pro package is available on the double cab, which offers room for five. The bed gives you five feet of cargo space.

The 2017 Toyota Tacoma comes in several models and is available in either two-wheel or four-wheel drive. Some of the models even sport a moonroof.

All of these features are designed to excite the adventurer in you, and she might even let you drive it.

Give her power and performance this year, and stop by to see us, so we can show you all of the other features of the 2017 Toyota Tacoma TRD Pro. Test drive it today.