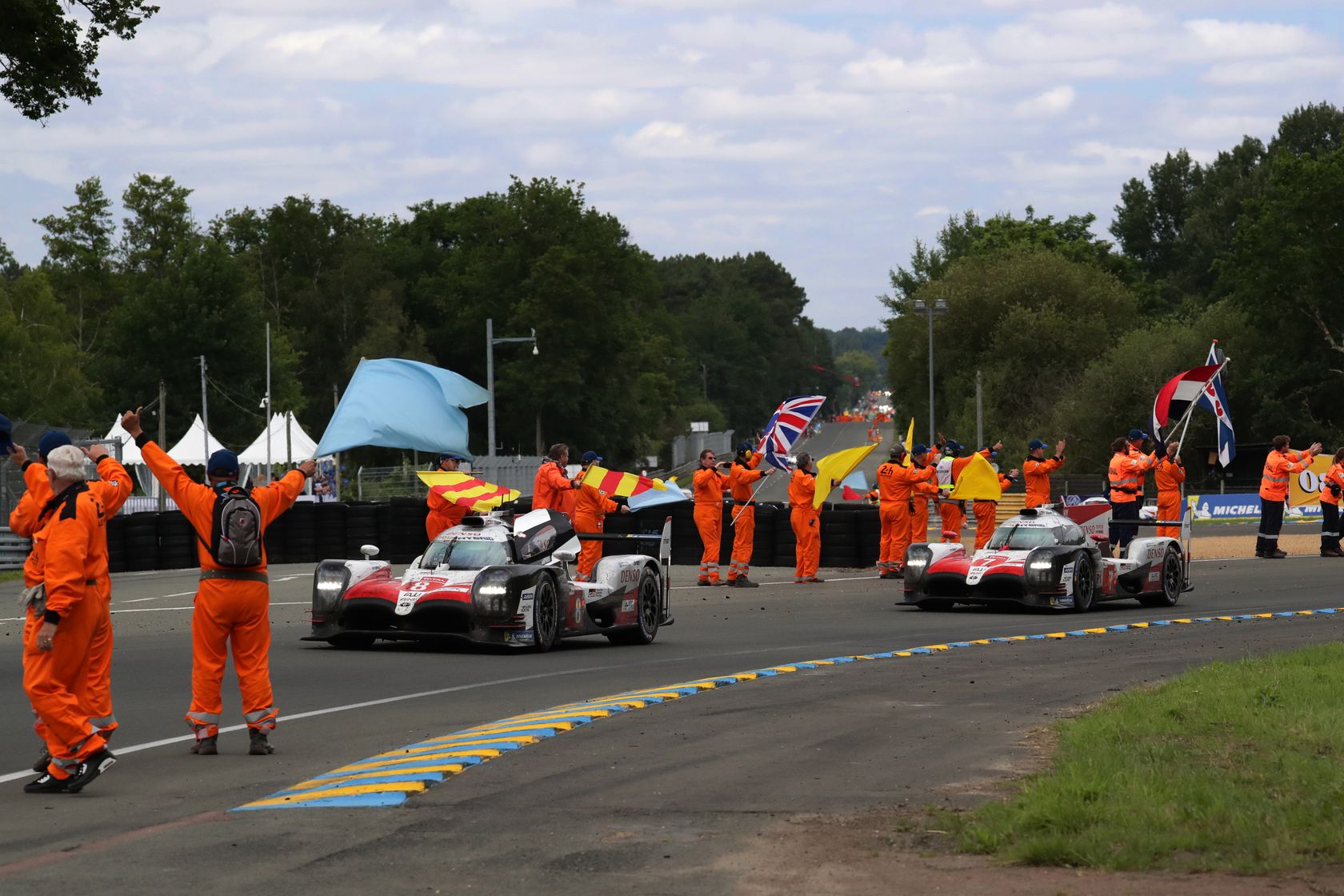 Sébastien Buemi, Kazuki Nakajima and Fernando Alonso in the #8 TS050 HYBRID started from pole position and took the chequered flag after 388 tense and often dramatic laps at the Circuit de La Sarthe to extend their lead in the FIA World Endurance Championship (WEC).

Mike Conway, Kamui Kobayashi and José María López, who led for long periods in the #7 TS050 HYBRID, made it a perfect result for TOYOTA with second place in front of 256,900 fans.

TOYOTA, which had entered 47 cars at Le Mans prior to this weekend’s race and finished on the podium six times, becomes only the second Japanese manufacturer to win at La Sarthe, while Kazuki is the first Japanese driver to win in a Japanese car.

The result is a culmination of intense and determined efforts by TOYOTA GAZOO Racing colleagues from Higashi-Fuji and Cologne to continually enhance its hybrid-electric technology, which won this weekend’s race using 35% less fuel than in 2012, when it returned to endurance racing.

The two TS050 HYBRIDs were evenly matched throughout the 5,286km and swapped places several times during a race which featured its share of drama for the leaders.

Two stop-go penalties for the #8 car, compared to one for the sister car, required an impressive night time stint from Fernando to come back into contention on a day when all drivers performed exceptionally in a high-pressure environment.

A late fuel issue dropped the #7 car off the lead lap so Kazuki took the chequered flag for the #8 with a lead of two laps. The #3 Rebellion finished third, 12 laps behind.

After a nine-week break, TOYOTA GAZOO Racing will return to action on 17-19 August with the 6 Hours of Silverstone, the third round of the 2018-19 WEC season.

Akio Toyoda, President, TOYOTA Motor Corporation: “Finally, we won 24 Hours of Le Mans this year. Of course this is another step towards the next challenge so I would like to ask your continuous support from now on too. Thank you very much. “Thank you for driving all out!” Please let me direct these words to our drivers, who drove our cars for the longest distance at Le Mans, finally in our 20th challenge. At the same time, I would like to say the same to our cars, completing 388 laps, approximately 5,300 km. And “thank you very much for letting us and our drivers drive all out!” I want to say this to all fans who have supported us for a long time, our partners and suppliers who have battled together with us, and all the team members and the people related to our team. I want to express my sincere appreciation to all.”

Hisatake Murata (Team President): “I am so proud of everyone in the team for this result. It has been our dream to win Le Mans and finally we have achieved it. Thank you so much to everyone for their incredible hard work, team spirit and never-give-up attitude. To win Le Mans for TOYOTA after so many frustrations and disappointments is a truly magical moment.”

Mike Conway (TS050 HYBRID #7): “It was an intense, close fight for a long time; we were all nervous watching on TV. We were all out there to do the best we can without taking big risks. It’s been a long race, lots of things changing. It shows that TOYOTA can build two strong cars and we can race hard. Congratulations to car #8, they had a great week and a great race. Our car fell short but it’s a great team result.”

Kamui Kobayashi (TS050 HYBRID #7): “Congratulations to the car #8 crew and the whole team. TOYOTA made a great job to finish the race without any mechanical troubles; just amazing. We wanted to win of course but car #8 was really strong. This is endurance racing so we tried to be safe and to manage the car. In the end both cars finished well. To be second and part of a winning TOYOTA team makes me very happy.”

José María López (TS050 HYBRID #7): “I want to congratulate car #8 and the whole team. I am really proud of my #7 team, and Kamui and Mike; we gave it our all. We are here as six drivers but there are so many people behind us, working so hard. This is a big achievement for TOYOTA and that was the main target this week. We had a fair fight between the cars but to be able to bring the trophy back to TOYOTA is fantastic.”

Sébastien Buemi (TS050 HYBRID #8): “This is definitely the biggest win of my career. I struggle to realise it right now because in the last few laps I couldn’t forget 2016. To finally see the car crossing the line was really special. All the preparation that goes into this day from everyone in the team, when you finally win it, it is something really big so I will enjoy this. Congratulations as well to car #7 who did an amazing job as well.”

Kazuki Nakajima (TS050 HYBRID #8): “It’s great to be here finally; it has been a long time. I am almost speechless. I had great team-mates and TOYOTA gave us a very strong car. We finished the race without any issue on both cars so I feel we all deserved to win the race. To win this race has been a big dream for all of TOYOTA since 1985. There have been many people involved in this project so I am proud to be here to represent all that effort.”

Fernando Alonso (TS050 HYBRID #8): “It has been amazing. We know how important and iconic Le Mans is in the world of motorsport and as a team we achieved an amazing result. Every moment was a reminder of how tough and long this race is, anything can happen so we tried to execute our race and stay calm. Happily everything worked well. The race was hard because the two cars were very close, within one minute after 23 hours, so it was tough competitive but fair and very sporting. We wanted a one-two and we achieved that so I am very happy.”