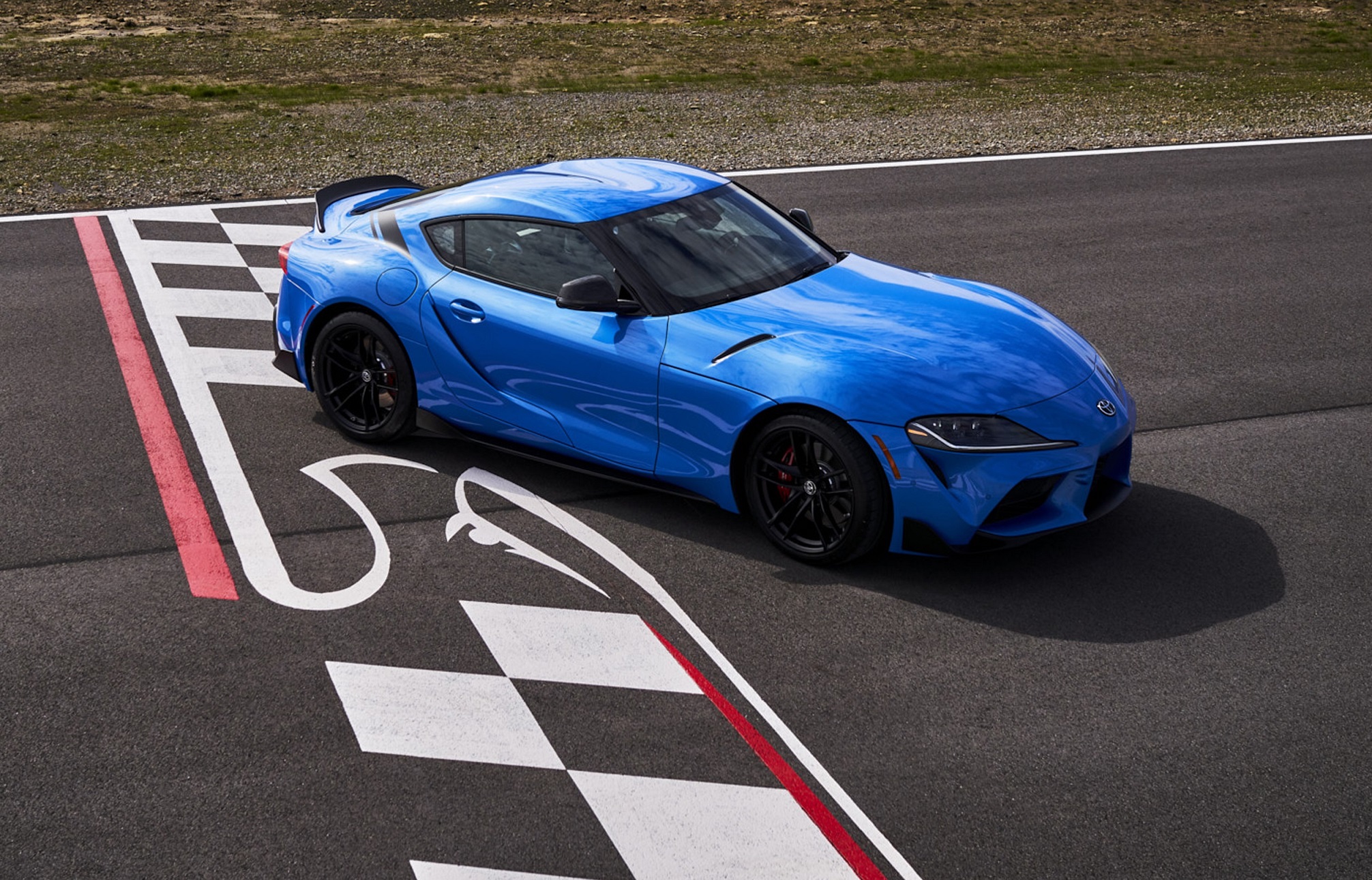 For 2021, the six-cylinder GR Supra 3.0 Premium model leaps ahead with a power boost and retuned chassis, while a new GR Supra 2.0 four-cylinder turbo model joins the line, as well as a new A91 Edition. This special edition Supra will have the 3.0-litre inline-six cylinder engine and will be available in a choice of two colours, Nocturnal or Refraction, the latter exclusive to the A91 Edition and an all-new colour for Supra. Accenting the Supra’s concept car-inspired body are a rear black carbon fiber lip spoiler, matte black wheels, C-pillar graphics and carbon fiber mirror caps. The black Alcantara® leather-trimmed interior with blue contrast is likewise exclusive to this limited-availability model.
On the 2021 Supra 3.0 Premium and A91 Edition, the front Brembo® brake calipers are painted red and feature the “TOYOTA Supra” logo.
The 2021 GR Supra models are anticipated to start arriving at Toyota dealers this summer. Here’s what to brace for:
More Power. Because, Why Not?
The 2020 Toyota GR Supra brought the revered model back in a blaze of speed, with acceleration and handling performance that outshone even its illustrious A80 predecessor. For 2021, Toyota is keeping the pedal down, boosting output of the Supra’s turbocharged 3.0-litre inline-six from 335 hp at 5,000-6,500 rpm to 382 hp at 5,800-6,500 rpm, a 14-percent increase. Torque rises from 365 lb.-ft. at 1,600-4,500 rpm to 368 lb.-ft. at 1,800-5,000 rpm.
The increased output results from a slew of upgrades throughout the engine. The new dual-branch exhaust manifold, with six ports instead of two, improves heat management. A new piston design reduces the engine’s compression ratio from 11:1 to 10.2:1.
The greatly revised engine produces higher torque at higher rpm and retains the eagerness to rev with turbine-like smoothness. Toyota projects that the new engine will reduce the Supra 3.0 model’s 0-96 km/h acceleration time to 3.9 seconds, from 4.1. The 8-speed automatic transmission with paddle shifters carries over for 2021.
Retuned Chassis for Supra 3.0
The 2020 GR Supra won praise for its ride/handling balance, but even the exceptional can be improved. Seeking increased roll resistance and enhanced cornering stability, Toyota retuned the Supra 3.0 chassis, adding lightweight aluminum braces that tie the strut towers to the radiator support to increase lateral rigidity, along with front and rear bump stops and new damper tuning. Revised programming for the electric power steering (EPS), Adaptive Variable Suspension (AVS), Vehicle Stability Control (VSC) and Active Differential works in concert with the hardware changes to make the 2021 Supra more stable through quick transitions, such as compound turns.
The First Four-Cylinder Supra Is Quick and Light
The 2020 GR Supra broke from the model’s traditions in several areas, and the 2021 version seems to do it again with the first-ever four-cylinder turbo model. Or does it? The new Supra 2.0 becomes the entry model, returning a two-tier performance lineup that parallels the A70 and A80 Supra models.
The 2021 Supra 2.0 offers an intermediate model between the Toyota 86 and the Supra 3.0, giving the customer three distinct Toyota sports car choices.
The 2.0-litre inline four-cylinder engine shares much of its technology with the 3.0-litre inline-six, including a twin-scroll turbo, direct fuel injection and continuously variable timing on both the intake and exhaust camshafts. The variable intake valve lift system adjusts intake valve timing and duration. The bottom line is 255 hp at 5,000-6,500 rpm and a stout 295 lb.-ft. peak torque at 1,550 to 4,400 rpm.
The Supra 2.0 uses the same 8-speed automatic transmission as the 3.0, and Toyota projects 0-96 km/h in 5.0 seconds, which will make it Toyota’s second quickest vehicle in the lineup. The Supra 2.0 has the same electronically limited 250 km/h top track speed as the 3.0, and its fuel consumption will be lower.
The Supra Lightweight
The 2021 Supra 2.0 offers much more than a lower price point. At 3,181 pounds, it is more than 200 pounds lighter than the Supra 3.0 while maintaining that model’s exemplary near 50:50 weight distribution. That’s because the weight reduction is spread throughout the car:
All 2021 Supra models are also extremely well equipped with a bundle of advanced safety systems, including:
Comparing 2020 and 2021 Supra GR Models
Straight to the Racetrack
Customers don’t have to wait long to get their hands on the new GR Supra GT4, as it will go on sale starting in August. It is based on the GR Supra and is developed and produced by TOYOTA Motorsport GmbH (TMG).
A three-litre inline six-cylinder engine with single twin-scroll turbocharger has been tuned to 320kW (430hp) with a 7-speed sports automatic transmission with paddle shifters and the mechanical limited slip differential driving the rear wheels. An Akrapovič exhaust system will be fitted and Ravenol will provide first-fill lubricants.
The front splitter and rear wing are made of natural fiber composite, contributing to an overall weight of 1,350kg (2,976 lbs.). Following the specification of the GR Supra road car, the front suspension will be MacPherson strut, and rear suspension will be multilink with KW dampers at the front and rear.
The braking system is enhanced using a dedicated brake caliper for racing, six-piston front and four-piston rear, while running on Pirelli tires.
Safety will be a priority and the GR Supra GT4 will be installed with a high-strength roll cage on the lightweight steel body, and an FIA-standard racing seat with six-point harness. The interior will feature a carbon fiber instrumental panel with a display and steering wheel specifically designed for GT4 competition.
Previous Post
Next Post
Milton ToyotaToyota CanadaToyota GR Supra Races Into 2021 with More Power and First-Ever Four-Cylinder Turbo Model