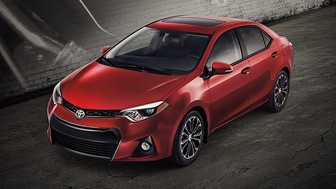 Built to surprise and delight drivers every time they take the wheel, the all-new Toyota Corolla was designed and engineered to hit above its price-point with feature content, thoughtful touches and advanced technologies typically found in far pricier rides.

Competing with compact sedan models from around the globe, the latest Corolla boasts a compelling combination of proven reliability, a reputation for owner satisfaction, and fantastic all around value, both short- and long-term.

Here’s a look at five key ways the new Corolla hits above its price point.

Premium Lighting: Like many of the world’s high-dollar luxury sedans and SUVs, the all-new Corolla boasts a potent LED lighting system. Standard on all models, the system employs Light Emitting Diodes instead of headlight bulbs, which offer virtually infinite service life, reduced weight, and minimal electrical draw, which indirectly helps save fuel. The LED lighting system generates a sophisticated after-dark lighting signature more common in premium models, and best of all, high-output lighting floods the road ahead with clean, white light that’s easy on the eyes, even after long nighttime drives.

High-Tensile Steel: Using a special, high-strength grade of high-tensile steel extensively throughout its construction, the new Corolla keeps its weight in check while boosting strength considerably. With the Corolla’s strongest-ever frame structure, benefits are numerous: a quieter ride, more agile handling, improved ride comfort, enhanced crash safety and more. Perhaps best of all is the Corolla’s solid, robust drive, which boasts a tremendous feeling of solid security. Further, thanks to the ability of high-tensile steel to create stronger structures that are smaller and more compact, all of the Corolla’s weight and strength attributes remain intact, despite a cabin that’s downright surprising in terms of roominess and ease-of-access. 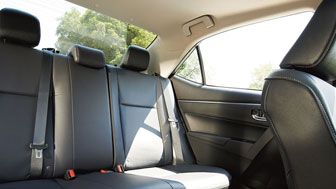 The Little Touches: Stitched leather. Chrome trim. Layered textures, colours and contrast galore. The Corolla’s cabin is designed to stand the test of time with a modern, sophisticated and energetic cabin design that showcases top levels of craftsmanship. Designed to impress, the Corolla’s striking cabin layout, with all the trimmings, will wow new and regular occupants for years to come.

Premium Interfaces: Keeping you informed is one of the Corolla’s great skills. With a colour driver computer screen between the instrument dials, and a 6.1-inch Display Audio screen with available navigation and backup camera, vital information, as well as access to your favourite contacts, media, information and destinations is right at your fingertips at all times. With a powerful graphics processor and intuitive menu interfaces, the Corolla’s central command interface is one of the best in its class.

World Class Efficiency: Deep beneath the Corolla’s skin, engineers have concocted a selection of the auto industry’s latest fuel-saving features, helping drivers go further on every tank of fuel. In a market where many models command premiums for special fuel-saving technology, the Corolla puts the focus on value efficiency with a proven blend of low rolling resistance tires, a fuel-saving Continually Variable Transmission (CVT), and the latest version of their proven 1.8-litre four-cylinder engine, which is familiar to mileage buffs the world over. Available Valvematic technology boosts efficiency and power output even further.

Units are available for test drives now, so stop in to see why the Corolla continues to be among the most popular vehicles on the road.